24-hour facility, funded by the HELP Appeal, will save lives of critically-ill and injured patients

The HELP Appeal, which is the only charity in the country dedicated to funding hospital helipads, donated £300,000 to Maidstone and Tunbridge Wells NHS Trust to build the all-weather pad at the rear of the oncology unit. It replaces the temporary site, which was often water-logged.

The helipad will help increase the chances of survival for seriously-ill or injured patients being brought to the hospital for treatment or flown from the hospital to specialist centres elsewhere in the country for treatment.

Air Ambulance Kent Surrey Sussex will be the main user, but it can also be used by other emergency services as well as charities such as the Children’s Air Ambulance, which provides a medical transfer service for critically-ill babies and children up to the age of 18.

Prior to unveiling a plaque to mark the official opening of the helipad, Princess Anne was introduced to representatives from the HELP Appeal, the trust’s helipad response team, and crew members from Air Ambulance Kent Surrey Sussex, which is celebrating 30 years of service this year. 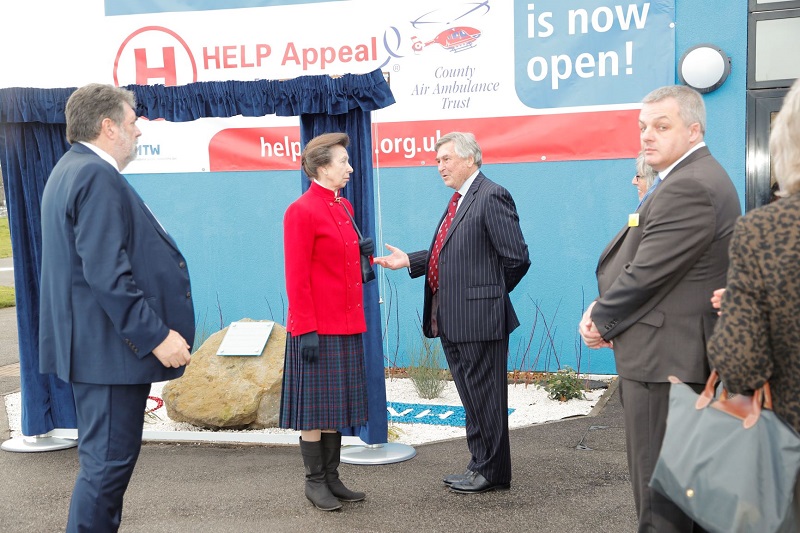 Miles Scott, chief executive of the hospital trust, said: “We are extremely grateful to Her Royal Highness for taking the time to open the new helipad, which was only made possible thanks to the generosity of HELP Appeal.

“To be able to offer a landing pad 24 hours a day, seven days a week so we can work in partnership with other agencies to ensure our patients receive the best-possible care at the right time in the right place is priceless.”

Robert Bertram, chief executive of the HELP Appeal, added: “As we rapidly approach the shortest day of the year, when there will be just eight hours of daylight, it’s fantastic to see Maidstone Hospital having a helipad, which not only enables patients to have immediate access to the emergency department, but is also fully illuminated, allowing air ambulances to land during darkness hours for the first time with critically-ill patients.

“We never hesitated for a second to fund this helipad, as we knew the difference it could make to the people of Maidstone, Kent and beyond. I am delighted that its significance is being recognised by Her Royal Highness, The Princess Royal today.”