Walking past the artwork people become absorbed in its detail, recognising and pointing out key local landmarks.

The new panorama replaces a previous version taken in 2005 which proved so popular that, 10 years later, the hospital asked arts consultants, Willis Newson, and artists Anna Heinrich and Leon Palmer back to update and replace it.

The artists captured the extraordinary panoramic view from the existing hospital tower, taking one image every hour over a period of 24 hours to complete the 360-degree view.

The artists painstakingly edited and lined each image up to make a seamless panorama.

The finished artwork is displayed in a corridor which links the new and old hospital buildings, allowing it to function as an orientation piece, and making the hospital a more-welcoming and less-stressful environment.

Irwin Wilson, associate director of contracts and lead for the hospital arts programme, said: “Our patients and staff have really enjoyed looking at the original panorama during the past 10 years so, to mark the 10th anniversary of the completion of the hospital building, we decided to commission an updated version. It’s great to watch patients and visitors stopping to point out places they recognise or working out where they live.”

The project was made possible by sponsorship from Hanman Split, a Gloucester-based company which fabricated and installed the work. 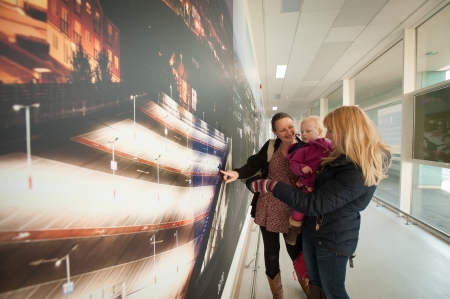