The ongoing uncertainty over Brexit and the impact on the economy are likely to have a negative effect on construction activity in the healthcare sector over the coming months, experts warn.

Barbour ABI figures, unveiled in its latest Economic & Construction Market Review, show that construction activity across all sectors increased by 2.8% in January this year, in contrast to the significant decline seen in the previous month.

However, the rolling three-month analysis indicated that for the three months to January output decreased by 0.6% and was heavily influenced by a dearth of activity in December.

More specifically, while the value of contract awards in the medical and health sector in February this year was £122m based on a three-month rolling average; this was a decrease of 9.2% on the previous month and 17.4% lower than for February 2018.

“The latest data reaffirms the subdued nature of the sector, reflecting the move towards improvement of local service provision rather than larger-scale renewal of capital assets,” says the report.

The North West region had the largest share of medical and health contract awards in February, with a 35.2% share, an increase of 24.9% on February 2018.

The largest contract award was the £18m Timperley Medical Centre near Altrincham, which was awarded to Whitfield & Brown Developments.

The North West region had the largest share of medical and health contract awards in February, according to Barbour ABI figures

Oxford was the location for the largest award in the region, with the £11.9m A&E expansion at the John Radcliffe Hospital, which was won by McLaughlin & Harvey Construction.

Sub-sector analysis indicates that the largest share of contract awards was for surgeries, health and medical centres, with a 47.9% share, closely followed by public hospitals, with a 46.5% share. The only other sub sector which saw activity in February was hospices, nursing and psychiatric homes, with a 5.6% share of activity.

But, despite a fall in contracts, it is sectors such as health that have been keeping the market going.

Glenigan construction forecasters report that transport, health and education were the three biggest construction clients in 2018, responsible for £5.2billion worth of contracts alone.

“As a result they are sliding down Glenigan’s ranking of the industry’s top 100 clients and are being overtaken by government departments.” 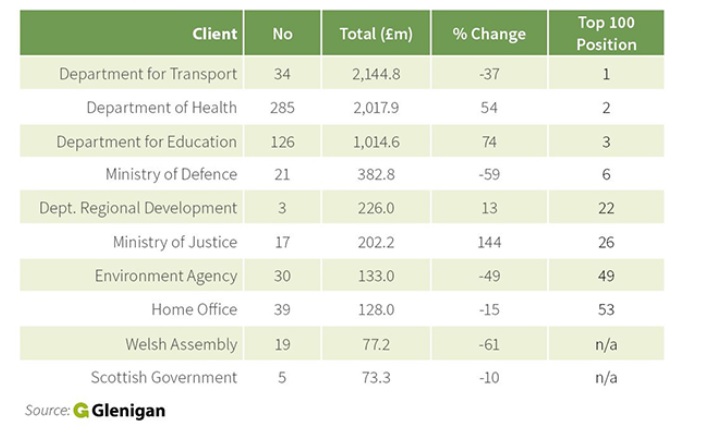 Government departments, including health, are helping to keep the construction market afloat

While the devolved governments in Wales and Scotland had previously featured among the top 100 clients, construction spending shrank by 61% and 10% respectively last year, according to Glenigan’s data.

And, after the devolved government in Northern Ireland collapsed in January 2017, the construction sector saw a slump through 2018.

But there is evidence it will bounce back over the coming months, offering new opportunities.