Fire safety is at the forefront of many people’s minds in light of the tragic events at Grenfell Tower.

When building services work has been carried out in a hospital or healthcare building there is a high risk that fire compartmentation could have been breached, which significantly increases the risks of fire spread

And, with hospitals and care homes occupied by many vulnerable people who would require greater protection and assistance in the event of the fire; many NHS trusts, housing associations, local authorities, and private care homes are examining their fire safety policies and how they carry out, in particular, fire risk assessments.

“Back in June, the Government ordered more than 17,000 care homes, private hospitals and hospices to carry out checks on the fire safety of their buildings.

As a result, a number of hospital trusts were found to have serious breaches, with some failing basic fire standards, but others warned that a failure to property compartmentalise areas was putting patients at intolerable risk if a fire broke out.

Fire compartmentation is vitally important and buildings 10 years old or less will have been built in accordance with Building Regulations Approved Document B, which requires that the building be sub divided into a number of discreet compartments or cells. Within each cell, the dividing walls are filled with specialist materials that prevent the passage of fire from one cell to another for a given period of time.

Compartmentation aims to contain fires based on the premise that large fires are more dangerous to occupants, fire and rescue services, and people located nearby. It has also been found to limit damage to a building and its contents.

One of the main benefits of compartmentation is that it protects ‘means of escape’ routes from a building. This is particularly important where there is minimal fire separation, other than the means of escape, for example a small care home served by a single flight of stairs.

In this case, the floor area may be open plan with no partitions. However, the stairs should be enclosed by fire walls and fire doors to ensure a fire within any part of the accommodation cannot pass through to the stairway.

Spaces that connect fire compartments, such as stairways and service shafts, are described as ‘protected shafts’. These play an important role in restricting fire spread between the compartments.

Fire separation, if installed correctly, does have an enviable success rate. However, it is the weaknesses that must be constantly considered, particularly when building service alterations take place

Larger buildings, such as hospitals, have greater reliance on fire compartmentation.

Most large buildings are divided into ‘compartments’ which can withstand a fire for a specific amount of time, either inside the compartment or externally. This protective barrier gives a chance for occupants to be evacuated and for emergency services to arrive and extinguish the fire, or for the fire to extinguish on its own.

Due to compartmentation, a hospital will employ a ‘horizontal phased evacuation’. Those able to be evacuated from the building without assistance will be evacuated immediately. In a compartment that has a fire, patients who cannot be moved far are moved to an adjacent compartment. This allows patients to be moved only a short distance if necessary, drastically reducing the dangers of being away from essential equipment, such as life support machines, during an emergency. 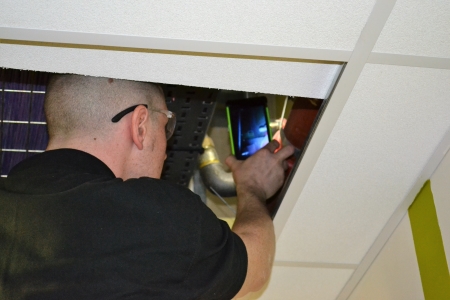 Fire defences can be breached when building services work is carried out, increasing the risk of a fire spreading

Fire risk assessments should be carried out by a competent person within the building, but in the majority of cases this does not extend to inspecting the integrity of the fire compartmentation.

When building services work has been carried out in a hospital or healthcare building there is a high risk that fire compartmentation could have been breached, which significantly increases the risks of fire spread. This was the case on a number of projects which we recently assessed in the North of England.

The breaches were mainly above ceiling level or within little-used cupboards and risers which were hidden from normal view. On further analysis, it was found that there were three main causes for the breaches.

Our experienced team carried out a detailed survey of the fire compartmentation and fire breaches. This work was carried out using a smartphone-enabled survey system.

Each penetration was marked with a unique code and identification number and photographed for future reference. Building layout drawings were also marked with every penetration, which included instances of the wrong fire stopping material being used. Our FIRAS-accredited team was then appointed to complete the works to make each building completely fire safe. 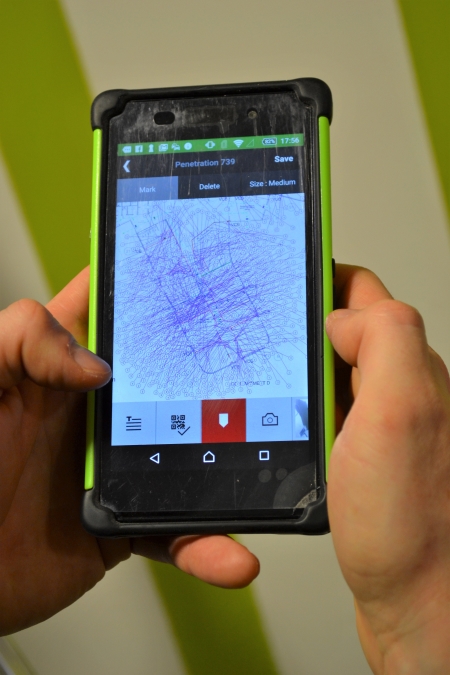 Each time we made safe a fire penetration it was captured on our survey system and photographed. The client can then be supplied with comprehensive reports detailing all the works, materials used and drawings.

The client can be assured that the fire compartmentation system will operate to the required specification, which includes giving occupants a certain number of minutes in which to escape – which is extremely important in a hospital setting.

Fire separation, if installed correctly, does have an enviable success rate. However, it is the weaknesses that must be constantly considered, particularly when building service alterations take place. As a result of this, the importance of fire risk assessments cannot be underestimated and if the assessment is not sufficiently rigorous, it could lead to a potential failing of fire compartmentation, allowing a fire to spread.

Fire doors are an important part of ensuring fire compartmentation is maintained too, but they often are not subject to sufficiently-rigorous or regular inspections.

Again, this could lead to a breach of fire compartmentation, for example if the fire seals are broken, the door closers are not working properly, or the ironmongery has become worn or the glazing detached.

There are very serious considerations for healthcare trusts and care home managers that do not undertake adequate fire risk assessments as it could compromise the safety of the whole building.

Fire risk assessments should include a review of a building’s fire compartmentation by a competent person or external fire inspection company, thus minimising the risks to occupants and a building.