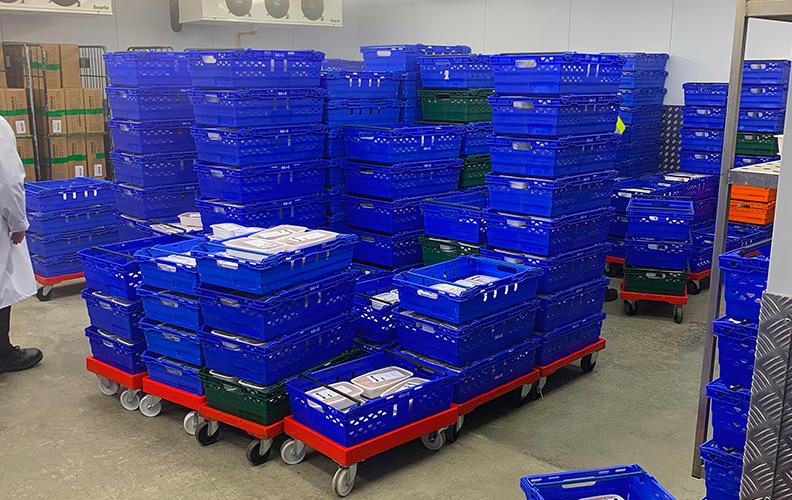 Medstor recently joined forces with sister company Mailbox to help NHS Greater Glasgow and Clyde (NHSGGC) keep its food production service running smoothly during increased demand for hospital meals during COVID-19. NHSGGC operates two large cook freeze production units (CFPUs), where food is prepared, cooked and frozen. Once dishes are cooked, they are decanted into smaller portion packs and immediately blast frozen using specialist freezing equipment. They are then stored in the CFPU freezer holding area before being packed and dispatched to each hospital site, where the nutritious and tasty meals are regenerated and served. Teamwork between Medstor and Mailbox helped to support the outstanding work done by the unit and keep product moving and patients fed.

Medstor has worked with NHSGGC for many years, providing specialist healthcare storage solutions across its sites and departments. Ian Fisher, Medstor’s national sales manager for Scotland, regularly calls in to the health board’s hospitals, and it was during one such visit that he met Margaret Valenti and Michael McCall at the CFPU. The CFPUs provide 7,652 meals a day, a total of 38,260 meals each week between the two sites - a number that has increased during COVID-19. The units have used Mailbox food storage containers successfully for several years, praising their long-lasting durability. As well as being very robust, the containers, which are made of food-approved plastic, stack for efficient use of space and have bale arms for added strength and protection of contents.

During Ian’s visit, Margaret and Michael placed an order for an additional 1,200 containers to help deal with extra stock. They also mentioned some issues they were having with the dollies being used in the units. Dollies are wheeled platforms, used to move heavy containers, and are a useful and important part of the materials handling process. In the CFPU, the castors on the dollies were freezing or stiffening during the blast freezing process, causing a potential hazard when they tipped over due to the wheels seizing up. Fortunately, Ian knew that Mailbox would be able to help.

Ian liaised with Simon Towey, Mailbox product manager, to provide several Mailbox freezer-safe dollies for the units to trial. Margaret and Michael were so pleased with them that they placed a large order for 150 dollies, which they needed as soon as possible. Mailbox immediately provided all the M725 containers and accompanying dollies it had in stock. The rest of the order was met quickly, with products being taken to the CFPUs at the Inverclyde Royal Hospital in Greenock and the Royal Alexandra Hospital in Paisley as soon as they came off the production line at the Mailbox facility in Greater Manchester.

“It was great to be a part of a team effort from all the divisions in Stamford Products, working together to help out in this epidemic from the initial meeting through to production and delivery and in the end a very happy customer, who I now drop in to see when I am on site in my healthcare role.” Ian Fisher: National Sales Manager for Scotland, Medstor.