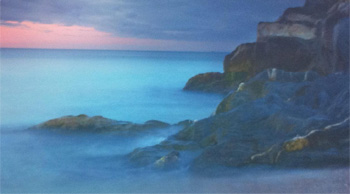 A series of commissioned artworks for the new women and children's development at North Manchester Hospital have now been installed. Artists Stella Corrall, Chris Foster, Simon Webb and Ben Hall were each asked to work within different areas of the unit, from the children's ward and main entrance to the special care baby unit, labour unit, post and antenatal departments and the midwifery-led birthing unit.

The resulting work is a series of three different photographers' images. In the children's ward, Corrall's work is linked to the sea theme, with a large-scale atrium artwork at the entrance, welcoming visitors to the development and aiding wayfinding 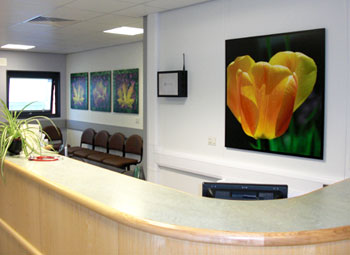 Artists have injected some welcome colour into the new women's health suite at Wythenshawe Hospital. Stella Corrall, Martin Nash, Helen Kitchen, Wendy Teall and Jacqui Symons were commissioned by LIME to design a number of works for the unit. They include a pressed plastics illuminated ceiling piece for a treatment room, large-scale colourful photos and montages for waiting areas and the recovery room, small jewel-like paintings for a corridor waiting are, and textiles for a quiet room 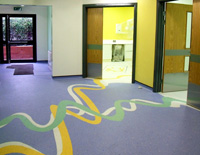 LIME was asked by Manchester PCT's dental services team to create a unique, intriguing and therapeutic environment for the new Withington Dental Care Centre. Stella Corrall was again consulted and worked with staff to develop design ideas. Suspended installations now act as a focus and provide a distraction during treatment and a flooring design leads visitors into and through the facility. There are also wall-mounted and illuminated artworks, a bespoke moveable screen and vinyl designs on doors 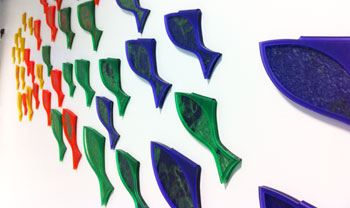 The new multi-faith centre at the Manchester Royal Infirmary is now sparkling with hand-made glass. Lime commissioned Opus Glass to produce bespoke glasswork that would integrate with the walls, doors and windows of the circular space. The main centrepiece and feature is a glass and copper prayer tree. The artists also crafted a curved wooden screen which divides the space in two halves

LIME is now working with Cheshire East Council on a pilot project at the Colshaw Farm Estate in Wilmslow to create a piece of public artwork in conjunction with young residents.