An inflatable operating theatre, a needle that can help detect cancer, and a novel new treatment to bring relief to tinnitus sufferers are just a few of the innovations that have come out of a partnership between designers and academics.

The Design Council’s mentoring programme, funded by the Department for Business Innovation and Skills (BIS) links universities with designers to help find user-centred commercial applications for new technologies and to create the materials and prototypes needed to take them to market.

The transition from the lab to the market is tough, and design, which is often overlooked during the critical early stages, is a significant factor in shaping user-friendly marketable products and services for the future

The successful projects were announced this week. They include a treatment for the common medical condition tinnitus - a ringing in the ears - which uses certain frequencies of light to stimulate areas of the brain. Designed by the University of Leicester and Orthoscopics, the technology is based on the use of red, green, and blue LEDs tuned specifically to each individual. Initial studies have shown they bring relief to around 40% of users.

Another medical innovation is an ‘intelligent needle’ that uses Raman spectroscopic techniques to analyse biological tissue in real time. This use of laser light provides an analysis or chemical fingerprint of materials such as human tissue and can distinguish between tissue types in the laboratory. A spokesman at Bristol University, which worked with medics at Gloucestershire Royal Hospital on the project, explained: “It is difficult to create a sensitive probe small enough to fit within a needle. However, we have demonstrated the early feasibility of this with a lab-based prototype.

“This device has been successfully tested on human lymph node biopsy samples. There are many potential medical applications, but one of the most promising is in the diagnosis of cancer. Currently suspected cancer is diagnosed by a biopsy, where a sample of the suspect tissue is removed and is sent for specialist analysis. In comparison, the Raman spectroscopic test is potentially quicker, more accurate, cheaper, and does not require tissue to be removed.

New UK companies, even whole industries, could result from the technologies we’re unveiling today and that could mean a major boost to economic growth, jobs and a better quality of life

Working with designers from Studiohead, the team has created a low-cost versatile simulation environment comprising an inflatable enclosure and various pieces of simulated surgical equipment such as an operating lamp and anaesthesia machine, together with immersive sound, visual effects, and differing prosthetics, allowing simulation of wound care, keyhole surgical procedures and A&E scenarios. This enables observation and recording of role-played scenarios to train surgeons.

In other industry sectors, the competition had led to the creation of new anti-counterfeiting technology based on the natural wing structure of butterflies, a new way of creating the decontaminating gas ozone within pre-sealed food packaging, and a unique method of capturing solar energy for domestic water heating. 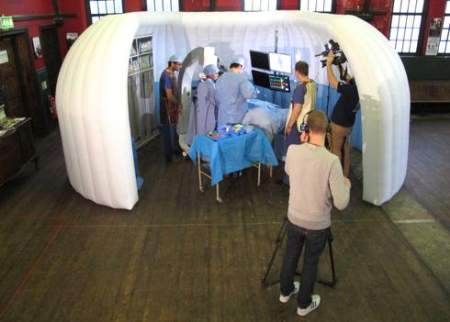 The projects are the work of academics from a total of seven universities - Exeter, Glasgow, Reading, Leicester, Ulster, Bristol and Imperial College London. Each brought forward four technologies which they thought might have commercial potential, or which they felt should be attracting more investor interest. Each was assigned a design mentor to help them through the process of identifying the true market potential for the product and the possible applications and developing and visualising these through the building of prototypes.

Head of the university mentoring programme for the Design Council, Ellie Runcie, said: “The transition from the lab to the market is tough, and design, which is often overlooked during the critical early stages, is a significant factor in shaping user-friendly marketable products and services for the future. New UK companies, even whole industries, could result from the technologies we’re unveiling today and that could mean a major boost to economic growth, jobs and a better quality of life.”

Previous successes with the programme include the Heartlight, a heart rate monitoring system for babies.