Architects are on a ‘crusade against corridors’ as they attempt to change traditional approaches to healthcare design.

The future of double-loaded, dimly-lit, never-ending hospital corridors could soon be a thing of the past as leading UK designers strive to eradicate ‘corridor syndrome’ for good.

Every hospital corridor I have ever been into is artificially lit and has doors on each side. I call it ‘corridor syndrome’

Richard Murphy of Richard Murphy Architects has worked on a number of healthcare buildings that have been designed not to have any corridors at all.

He told The Institute of Healthcare Engineering & Estate Management’s Healthcare Estates 2012 conference in Manchester this week: “I am on a crusade against the corridor. Every hospital corridor I have ever been into is artificially lit and has doors on each side. I call it ‘corridor syndrome’. You can’t see out of any windows and you get disorientated and don’t know where you are or where you are going. It is bewildering and if you have to use signage, or worse still coloured lines on the floor, then you have failed in my opinion. 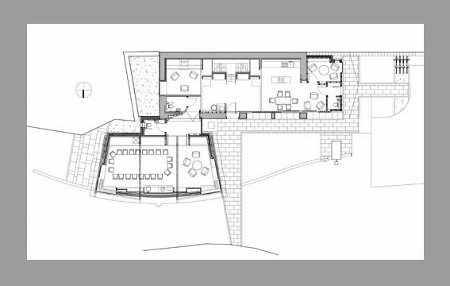 The architectural drawings show the open plan nature of the cancer care building, with no traditional double loaded corridors

“It is all about ease of movement and constantly orientating yourself with views. It’s about helping people to know exactly where they are and reducing any anxiety and making it a more humane place to be and to work.”

Murphy was a member of the design team behind the first ever Maggie’s Cancer Caring Centre in Edinburgh. A small building, the main entrance opens out so that all areas can be seen and visitors know where they are at all times. A series of courtyards replaces corridors, with rooms clustered around, providing a more interesting way of getting between the various areas.

He explained: “There was no room in the building for corridors, so we had to think differently. Now instantly when you walk through the door everything is blindingly obvious.

“Courtyards can help you to orientate and can be an area that can also be used by patients, staff and visitors.

“There is a tendency to think if we haven’t done it before then we can’t do it, but the best buildings are often the ones we have never done before.”

This is a view shared by Benedict Zucchi, architect director at the Building Design Partnership (BDP). He said the same approach was being used at Alder Hey Children’s Hospital where room clusters were being designed to negate the need for long corridors.

He said: “The client wanted a ‘hospital without precedent’ and we are getting away from corridors or the idea of corridors. Instead we are creating areas where you get glimpses of the outside and we are breaking up large wards into pods.”