With dwindling capital funding, there is growing pressure on healthcare organisations to better utilise existing estate, and they must increasingly justify any decision to expand floorspace. But there is more to enhancing buildings than merely sprucing them up. In this article we explore how circulation modelling is helping to maximise space and, in turn, improve treatment pathways

Over the past 10 years we have seen the development of a new generation of healthcare buildings, moving away from the concrete tower blocks of the 1970s and creating landmark facilities in which to deliver 21st-century care.

But, while these are certainly better-looking environments for patients, visitors and staff, is it a case of style over substance?

I think there is massive value in assessing how people flow around a hospital. It is useful for new-build projects, but also in existing hospitals where we can map out the patient flow

For hospitals this is a particularly important consideration as research has shown that poorly-designed facilities can actually impact on key performance indicators such as waiting times.

An example of this is Queen’s Hospital in Romford, Essex, which is expecting a major increase in people attending A&E due to the closure of neighbouring facilities and a change in demographics.

Instead of just expanding the facility, or knocking walls out, managers utilised a simulation tool, which maps the unit as it currently is and then predicts the impact of a 25% increase in patients. The hospital commissioned Buro Happold and Smart to carry out a circulation modelling exercise using its in-house simulation solution, SMART Move.

Simon Bourke, the company’s director of healthcare, told bbh: “People are at the heart of our design process. Our circulation modelling service assesses the interaction of people with buildings, processes and environments. This provides an evidence-based approach with powerful results to assess performance of designs and operations so that they can be optimised.”

At Queen’s Hospital this circulation modelling exercise showed bottlenecks in areas such as phlebotomy and X-ray, which was holding up patients’ journeys through the emergency department and potentially affecting the four-hour waiting time target.

“It is based on how people use spaces, how they move and how they interact with other people, processes and staff,” said Bourke.

“We know, for example, that people walk in a different way, whether they are men, women, or families with children, and that the way the spaces and processes are organised affects their flow and the time they spend in different parts of the processes, all of which has a direct impact on their experience of the space.

“If you know these things before you start to design a building, then you can look at key points such as corridors and entrances. Get those right and the flow around the building becomes much easier, which is vital in an area such as A&E.”

If you can do something as small as reduce a corridor by half a metre, then taken across an entire hospital this can represent a major cost saving in terms of energy use, maintenance and running costs

Modelling in this way is relatively new to the healthcare sector, although it has worked in other markets.

Bourke said: “We worked with a school that had been built under PFI and was not going to be easy to change, but there were terrible problems with crowding in one of the corridors. We mapped it out and worked out that by simply removing the school bell the end of the classes were slightly staggered, only by 30 seconds or so, and that by closing a couple of doors to positively redirect the flow during busy times, everyone would move much more quickly and safely. We are now looking at how this sort of approach can work in healthcare environments.

“Using simulation and circulation modelling you can test the impact of moving a room somewhere else.”

At Queen’s Hospital, the team gathered data from various sources, including A&E records, which show a patient’s journey through the department and the timescale. The team also reviewed CCTV footage to watch how people moved around the unit.

Various scenarios were then tested and the model was run with a 25% increase in patients to gauge the impact.

“Looking at all this data, we found some of the bottlenecks at Queen’s A&E were caused by inefficiencies in the blood testing process, which was something we were not expecting,” said Bourke.

“The hospital was looking at introducing A&E rapid assessment treatment. This meant patients get seen sooner by fully-qualified consultants instead of a triage nurse. This would have meant significant investment in manpower.

Fit for the future

“What the modelling told us was that this would only improve the situation in some parts of the A&E, like major bed areas, but might also make it worse in other parts, like waiting areas. If we hadn’t have carried out this modelling exercise, then they might have gone ahead and done that and still been left with the same problems in the waiting areas.”

The trust had another five options, but they were also found to have little impact. What the modelling did show them was that they can achieve what the need through a simple re-organisation of the spaces and processes and by only extending the unit by the required amount.

“I think there is massive value in assessing how people flow around a hospital,” said Bourke. “It is useful for new-build projects, but also in existing hospitals where we can map out the patient flow.

“Where normally architects are the first port of call, we are engineers and we support those architects to work with clinical planners to create buildings that are truly futureproofed and fit for purpose.

“If you can do something as small as reduce a corridor by half a metre, then taken across an entire hospital this can represent a major cost saving in terms of energy use, maintenance and running costs. Modelling can help to highlight these areas and can reduce the overall cost of a building quite considerably.”

This was the case at the Royal National Orthopaedic Hospital in London, where savings were secured by reducing corridor width and bed lift capacities through optimised design based on the results of modelling predicted journey and activity patterns.

Bourke said: “Our team modelled a typical day in the life of the hospital, which showed that the number of times two beds will conflict in a corridor was only once or twice a day. This meant that simple passing bays were enough to enable opposite bed movements, cutting down on the required width significantly.”

“Space is a rare commodity today and maximising what we have is crucial to success and longevity. The benefits of this approach can be far reaching and range from improving human productivity and contributing to wellbeing, to achieving cost savings, maximising revenues and minimising operational management. 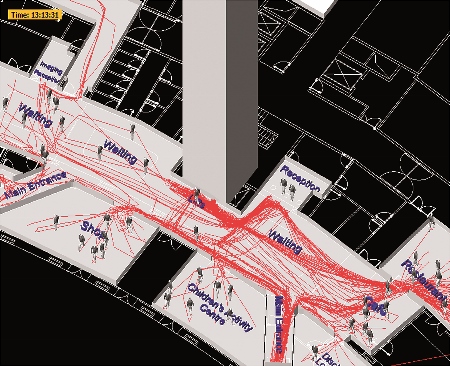