Ben Gummer, MP for Ipswich visited the newly-completed centre to mark the handover. He said: “I am delighted that the GPs, practice nurses, and staff of Two Rivers Medical Practice now have a fantastic new centre from which to serve patients.

"This is so satisfying as, together with local GPs, I fought hard to get the money for this innovative scheme and I know that it will help them deliver an even better service.

"This medical centre will provide patients in North East Ipswich with a range of integrated services under one roof.”

As well as the comprehensive medical facilities, the new building incorporates a series of public art commissions. Apollo appointed an art co-ordinator who worked with the GPs patient participation group to decide on colour schemes, signage, rebranding and also paintings, murals and furniture. As a result, Ipswich-based furniture maker, Tim Germain, was appointed to create the children’s benches in the waiting room as well as the outside seating area, which has been made in the shape of the new practice logo. Both pieces of furniture were created using recycled wood sourced from trees that had blown down in Holywells Park in Ipswich during the storms of 2014.

Another local artist, Mark Beasley from Woodbridge, was also commissioned to produce paintings and a mural. He produced an artwork depicting the skyline of Ipswich which features some prominent landmarks.

Stuart Clarke, Apollo development manager, who lives in the town, said: “As the developer of this primary care scheme, we are delighted to see the project reaching completion. This is a fantastic new medical centre for the town which will provide the Two Rivers Medical Practice with both the flexibility and capacity to provide a wider range of services to the community for many years to come. We hope to build upon this success further by working with other GP practices which are in need of new premises.”

Rob James, Apollo’s managing director, added: “The completion of the Two Rivers scheme is the culmination of many years work by several organisations. Apollo has again created a welcoming and high-quality environment for patients and staff with added value through art commissions and bespoke interior design. It is very satisfying to see staff and patients alike enjoying the building and appreciating the efforts of the team.”

And Dr Jonathan Knight, one of the partners of the Two Rivers Medical Centre and project lead, said: “It has taken many years of hard work for us to get to this point and we are grateful to all the individuals from many different organisations that have supported this project.

"We have now realised our dream of a 21st-century primary care medical facility from which we can provide care for generations to come.” 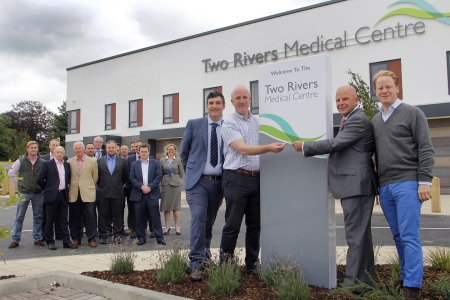