The Government is close to launching a whopping £30billion construction framework covering projects for a number of public bodies, including the NHS.

The move comes at a time when industry figures show construction activity on the whole is down, with the medical and health sector reporting a slight increase in January this year compared to December, but an overall drop on this time last year.

The recent collapse of Carillion has not done much for confidence in the sector, which is already facing a number of headwinds

According to figures released this week by analysts at Barbour ABI, the medical and health sector accounted for just 3% of overall construction activity in the month of January 2018.

But there is light at the end of the tunnel, with the Crown Commercial Service (CCS) confirming it has begun developing what will be the biggest construction framework in the country, enabling public bodies such as NHS trusts and local authorities to appoint contractors for construction, refurbishment and demolition jobs.

The agreement could be worth up to £30billion over four years, with the potential for a three-year extension based on performance.

It will be developed alongside the Government Construction Strategy, which will be published later this year.

The strategy is expected to include a greater emphasis on offsite construction following the announcement in the Autumn Budget that the Government will favour offsite manufacturing on all publicly-funded construction projects from 2019.

The decision to run the framework followed a CCS survey last year in which 90 firms declared their interest in working under such a deal.

The announcement comes after a volatile 2017 for construction. 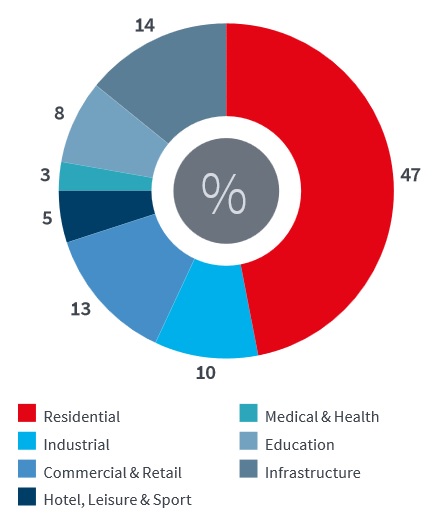 According to an ABI Barbour report, the medical and health sector made up just 3% of overall construction activity in January

And 2018 has so far been no better for the industry; with the value of new contracts awarded at £5.4billion, 10.6% lower than the same time last year.

Residential housing and infrastructure both dominated the construction sector in January, with contract values at £1.9billion and £1.7billion respectively, which combined is more than 65% of the total value of construction in the month.

Eight of the 10 biggest projects last month came from these sectors, albeit smaller in value than the ‘big ticket’ projects regularly seen.

These included the £200m Wednesbury to Brierley Hill Metro Extension and the £100m Waste Water Treatment Works in Blackburn.

Across the industry, education and hotel, leisure and sport sectors both saw monthly decreases in value in January. The remaining sectors of residential housing, infrastructure, commercial and retail, industrial, and medical and health all saw increases on the previous month, but overall below the levels of January 2017.

Regionally, it was London that led all regions with contract award value at 32% of the UK total, largely thanks to the aforementioned £800m Spire London Hertsmere House. This was followed by the North West with 13% of contract awards, and Scotland with an 11% share.

Commenting on the figures, Michael Dall, lead economist at Barbour ABI, said: “The recent collapse of Carillion has not done much for confidence in the sector, which is already facing a number of headwinds.

“Mainly due to a lack of major projects, construction has been held back in January. Nevertheless, encouraging figures from the residential housing and infrastructure sector is pleasing, but other sectors now need to help pick up the slack, such as hotel, leisure and sport, which produced its lowest figures in January since October 2015.”

“The decline was led by falls in commercial, civil engineering and public sector work which overshadowed a strengthening in private housing and industrial work.

“Overall non-residential projects were 20% lower than a year ago, but 7% up against the three months to October on a seasonally-adjusted basis.

“The year-on-year decline is due to a halving in office project starts and persistent weakness in public-sector-funded areas such as health projects.