One of the most-challenging refurbishment projects ever carried out within the healthcare sector has drawn to a close, with the completion of a £26m programme of works at Guy’s Hospital in London.

Originally built in 1974, the concrete exterior of the 142m-high hospital was in need of refurbishment having suffered from spalling which had exposed the steel reinforcement to further corrosion.

For Guy’s and St Thomas’ NHS Foundation Trust, which runs the hospital, the most-feasible way to secure its future for the next 30 years, and improve its environmental performance, was a full refurbishment of the external façade, including new replacement windows, energy-efficient aluminium cladding, and a new roofing system.

Based on a design by architects, Penoyre and Prasad, and consultant, Arup Façade Engineering, contractor Balfour Beatty completed the entire re-cladding of the taller service tower with a zigzag profiled anodised aluminium system. This new facade not only modernised the aesthetic, but also provided environmental benefits, with a potential saving of 18% of total energy consumption. 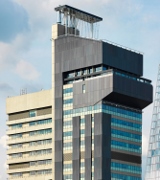 The external refurbishment was further complicated by the level of work required inside the live hospital environment, where the various teams had to work around the staff and patients with minimal disruption. Fully-sealed floor-to-ceiling barriers were required to separate work zones so that finishes to window ledges could be completed, while all materials were fabricated away from any work zone to minimise noise.

A staggering 8,000sq m of aluminium cladding panels have been installed on all elevations of the service tower and a further 5,300sq m of glazing units in all elevations of the user tower. The glazing uses solar selective glass in order to minimise solar gain and optimise orientation. Across the site a total of 34,500sq m of concrete has been cleaned and extensive concrete repairs carried out.

“Repairing spalled concrete and installing new cladding systems directly to the structure without affecting staff, patients or the general public was always going to be a challenge. The successful completion of the project is testament to the hard work and dedication of all involved.”