The new Forth Valley Royal Hospital in Stirlingshire has implemented the country’s first robotic delivery system. Not only is the innovation a cost-saver, but it is also helping to boost infection control across the site. JESSICA FURSETH asks if this is the future for estates and facilities management 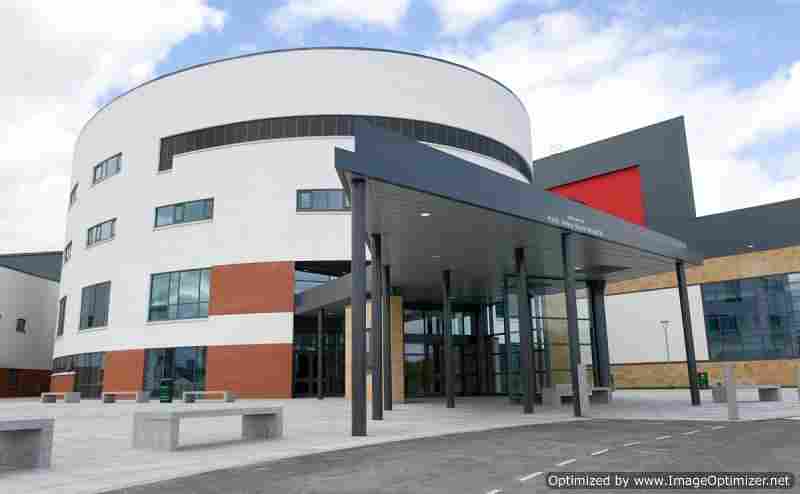 BEHIND the schemes at the new Forth Valley Royal Hospital, 13 robots are busy at work moving food, linen and waste. Open since July, the Stirlingshire hospital is not only the biggest NHS construction project ever undertaken in Scotland, but it also boasts the UK’s first robotic transport system.

From our point of view, the main benefit of the robotic delivery system is the reduced chance of cross-infection

“The technology is state of the art,” says Mike MacKay, contract director for Serco, which operates and maintains the robots. “The guided vehicle system moves materials around the building, inside dedicated corridors and lifts completely segregated from patients. Currently these materials include medical supplies, waste, linen and food, and sterile supplies shall soon be added to this list.”

What happens now is that rather than having many people moving heavy things around the hospital, you have people looking after the robots. Portering time is freed up to spend more time assisting patients

Part of the £300m build, the robotic system cost £1m to implement. Newly added is a machine that can sort 2,000 items of mail an hour - the first of its kind in Europe. There is also a pharmacy machine, sorting medicines at high speed, and a robot specifically designed to clean large areas of floor space.

But, if you arrive at Forth Valley expecting to see a futuristic scene of mechanical helpers, you will be disappointed. The robots move inside custom-made corridors and lifts, meaning they stay out of sight. “The Forth Valley health board asked the design team to segregate the flows in the building, so that clinical flows were separate from the patient flows and so on, meaning the building needed additional lifts,” explains MacKay. This meant the pathways needed for the robots to move around in were already in place, creating an opportunity to include the system without extra infrastructure cost.

We are confident we not only have a clean hospital, but also one with low rates of outbreaks and infection

Robotic delivery systems are already commonplace in hospitals in the US and the rest of Europe, and Serco expects to see financial payback on the system within three years. But will this be the future for British hospitals? “It will be the norm if the infrastructure is in place, but this depends on what the customer wants,” says MacKay.

Forth Valley benefited from already having the necessary infrastructure of corridors and lifts, the cost of which is not included in the three-year payback period. “But, if the NHS customer writes into the contract specifications that they want segregated flows, like at Forth Valley, the design and construction team will include it in the spec,” MacKay adds.

You usually have a lot of hustle and bustle in the corridors, with noise echoing down the hallways. Here it is a lot calmer, because the back-of-house operations happens out of sight

With the Forth Valley system now in operation, Serco is receiving queries from other healthcare facility managers curious whether they too can get robots to do the heavy lifting. But MacKay says it would not be a good idea to install in an old hospital: “In my opinion, if you don’t have the robots built in at an early design stage I wouldn’t recommend it,” he says. “They need space, they need to be linked up with other systems like the fire system, they need to be able to communicate with doors and, if you have chutes for linen or waste collection, you need a system to tell the robots when the bins need emptying.”

Each robot works for 18 hours a day, allowing for charging. But, as they can carry only one cart at a time, Serco estimates one robot to do work equivalent to one hospital porter and MacKay points out that no jobs have been lost as a result of the robots: “What happens now is that rather than having many people moving heavy things around the hospital, you have people looking after the robots. Portering time is freed up to spend more time assisting patients.” 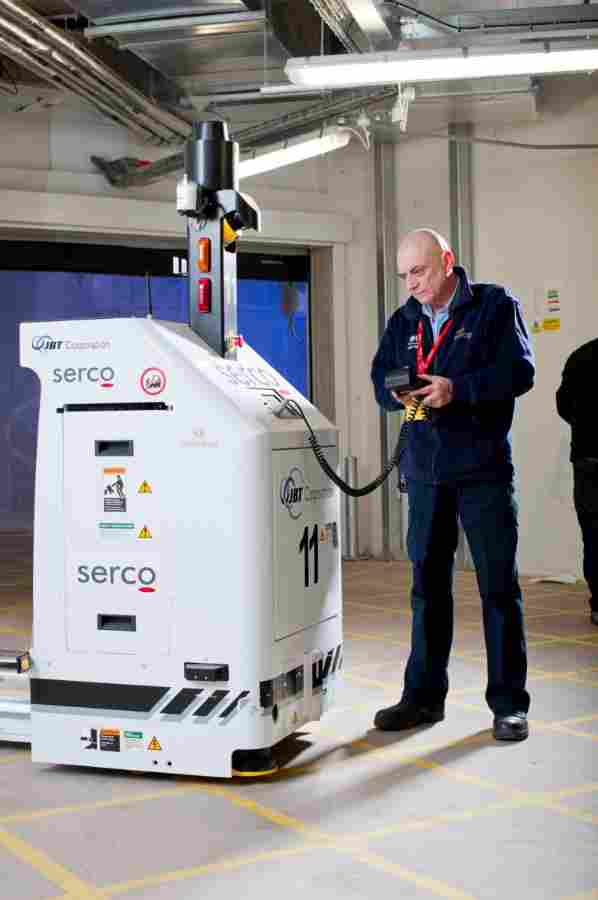 Serco developed the Forth Valley delivery system with an eye on infection control, as this was the main motivation for the hospital to request separate flows in the hospital. “We are confident we not only have a clean hospital, but also one with low rates of outbreaks and infection. There are other factors contributing to this, though; 50% single rooms, wider spaces between the beds, more private toilets and so on,” says MacKay.

“From our point of view, the main benefit of the robotic delivery system is the reduced chance of cross-infection,” says Maureen Coyle, project director at NHS Forth Valley. She says staff are delighted with how the system has transformed the hospital environment. 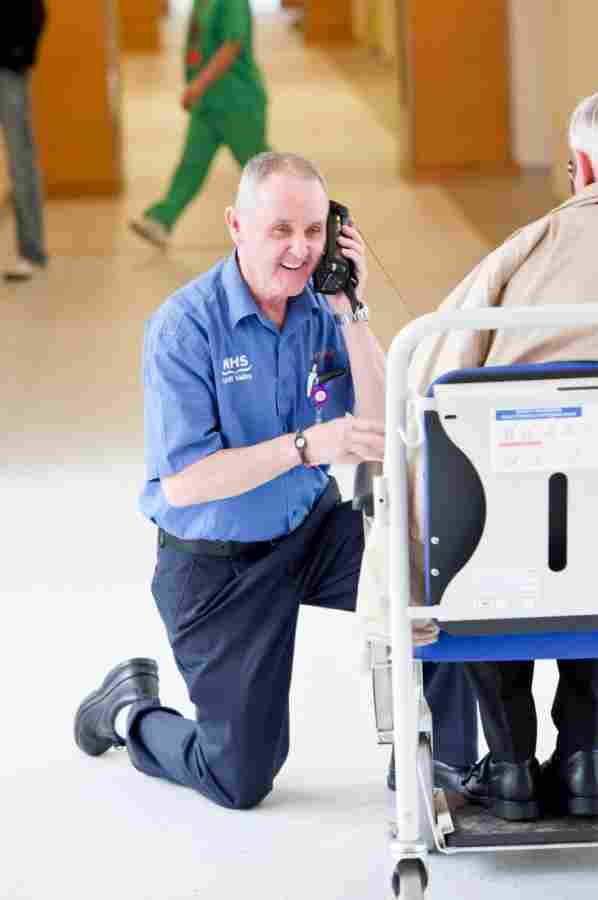 “The building is a lot calmer than a normal hospital. You usually have a lot of hustle and bustle in the corridors, with noise echoing down the hallways. Here it is a lot calmer, because the back-of-house operations happens out of sight.”

Coyle says none of the hospital’s doctors or nurses interact with the robots at all, but other staff such as porters have found their working days changed by the machines: “The system has probably removed some of the more physical side of hospital work, such as pushing around carts of linen and removing waste. This means porters have more time to spend with patients.”