Prater delivers the roof for a unique children’s hospital

Laing O’Rourke appointed Prater in 2014 on the strength of its technical expertise and previous experience on major healthcare projects as well as green roof systems.

Designed by BDP in consultation with patients, their families, the Princes Foundation and National Arts for Health, the 270-bed hospital is the UK’s-first NHS health park for children. It was a drawing by a 14-year-old patient that inspired the project’s final design and the building is designed with spacious rooms and wards, while offering views of the landscaped grounds from every room. The Prater in-house design team worked closely with Laing O’Rourke to make the architects’ plans a working reality.

The project includes a 52,600sq m main hospital and a 9,500sq m outpatient’s department. Work began on the hospital in March 2013, with Prater starting work in 2014. In addition to the complete green roof system at Alder Hey Children’s NHS Foundation Trust, Prater also installed a metal standing seam for the roof canopies and was responsible for the composite cladding and louvres to the hospital plant rooms. Furthermore, the team installed the rain screen systems fitted to each of the individually and brightly-coloured ‘jewel’ window pods that protrude from the main building structure.

The project posed a number of construction challenges including the inaccessibility of certain areas of the building. For example, building materials had to be delivered by rope access only within the vast atrium area, requiring extensive planning.

It was also important to select a waterproofing system suitable for the green roof application. These issues were considered at the design stage and, working with its supply partner, Radmat Building Products, Prater selected Verdiseal, a Dow liquid applied system. The two-coat system was chosen for speed of installation and its elastomeric properties allowing it to expand and contract with the building, ensuring a reliable seal. The ease of application also meant a safer process for those working on the less-accessible areas of the roof - where the pitch was as much as 45º. The insulation and waterproofing system selected provided the base for the extensive green roof Prater installed on site.

“With a project as complex as this, it is important to be able to collaborate to overcome potential challenges,” said Barry Coldron, operations manager at Prater.

The hospital was completed in September 2015, with patients and staff moving across from the existing building between the 2-6 October. The previous Alder Hey hospital will now be demolished and the materials recycled, giving the space back to the local community as parkland. 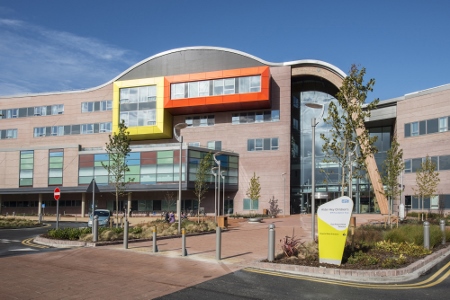