Over £2,000 has been raised by Courtney Thorne for the Bournemouth Hospital Charity to help them to fund a new specialist MRI scanner 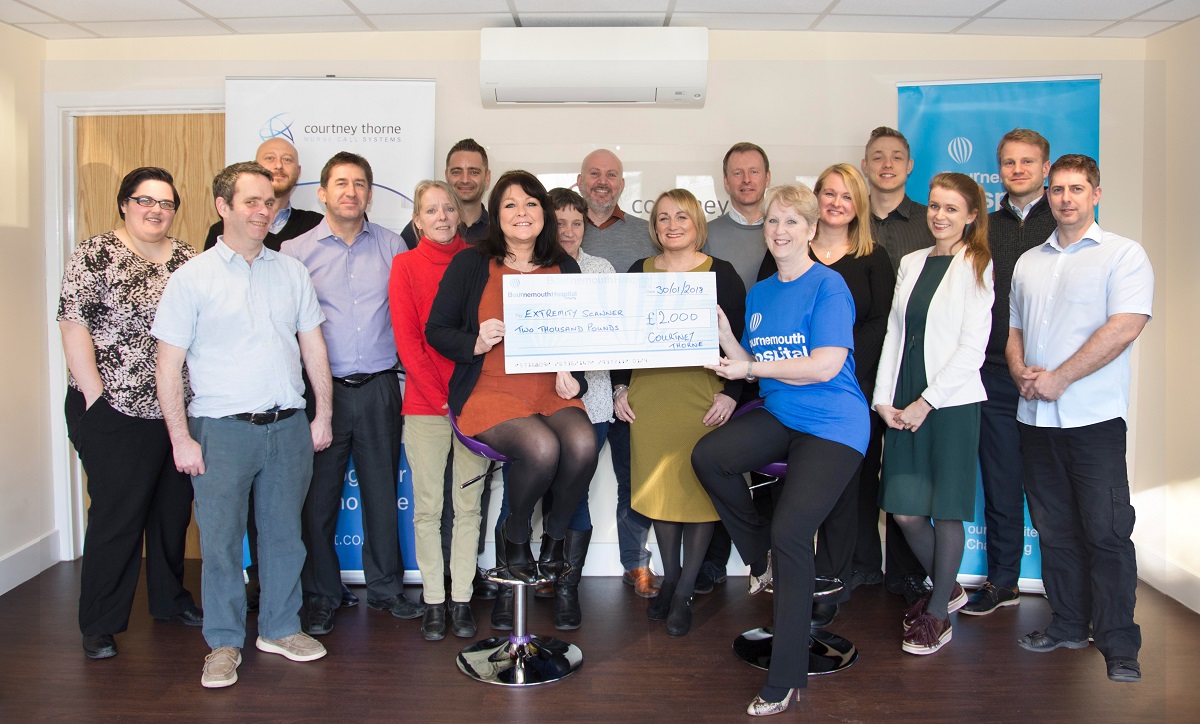 Fundraisers holding the cheque for £2,000

Courtney Thorne have been specialising solely in wireless nurse call technology since 1990 and have grown to become one of the UK’s leading designer and manufacturer in the sector. Personal stories reveal why Courtney Thorne chose to fundraise for this charity.

Lorrae, Sales and Contracts Coordinator at Courtney Thorne, had a few operations and was cared for last year at the Royal Bournemouth Hospital. “In January I had two operations on my hand and wrist, and in April I was diagnosed with breast cancer. As you can imagine it was a very worrying time for me and my family, however all the nursing staff and the pre-admissions staff were just wonderful."

Lorrae remembers “While I was waiting to see my oncologist, I sat next to a lady who was waiting for her daughter who had a test done on her brain. Unfortunately, she had to wait two hours, which she found tiring, as the hospital did not have enough scanners.

As such, when the time came for Courtney Thorne to choose a Charity of the Year, Lorrae suggested Bournemouth Hospital Charity because a new scanner would help a lot of people. Encouraged by Lorrae, colleagues at Courtney Thorne joined together to raise £1000 to help the charity to fund a new Extremity (arm and leg) MRI scanner.

Accounts Administrator Helen chose to have all her hair cut off as a way to raise funds for the charity. “Having close family and friends who have recently had treatment using an MRI machine meant it was a cause close to my heart. My hair was long and it was a scary experience, but for a very worthy cause. I also donated my ponytail to the Princess Trust to help make wigs for children sadly suffering from cancer.”

Ben, another fundraiser who sacrificed his beard for the cause, said: “Contributing towards the RBH MRI scanner was a no-brainer for me as over the last few years, I and some of my family members have had to have various MRI scans, and have witnessed first-hand the hard work and commitment that the staff show on a daily basis. I felt it only right to try and give something back.”

Graham Vickrage, Managing Director at Courtney Thorne said: “Being the UK’s leading wireless Nurse Call Systems provider we work closely with NHS hospitals and experience first-hand the impact they have on patients’ lives.

Courtney Thorne chose to support Bournemouth Hospital in raising money for a new specialist extremity MRI scanner. I am delighted Courtney Thorne has been able to double the amount our team have fundraised for such a worthy cause."

Bournemouth Hospital Charity were delighted to have been selected as the Charity of the Year. Andrea Piedot, Corporate Fundraising Officer said: “A very big thanks to everyone at Courtney Thorne for your amazing efforts raising over £2,000! It is a great pleasure to be supported by business that just like our charity has a mission to improve the lives of people who require care.”