Large-scale hospital developments like those seen in previous years across the UK are now few and far between, with budgetary pressures and changes to clinical pathways shifting the focus towards smaller refurbishment projects.

And nowhere is this approach better seen that at the Nuffield Diagnostics Suite at Citylabs in Manchester.

Rather than choose a vacant site elsewhere in the city, the development team wanted to locate the new building within the city’s medical corridor.

And this meant taking on a project where, from the very beginning, there were significant constraints on what could be done.

This was a very-difficult site and to begin with I thought it was a crazy idea. Why would we make our lives difficult when the project seemed so impractical?

Speaking to BBH, Alice Parker from Pozzoni Architecture, the practice which led on the Nuffield Diagnostics Suite, said: “Several sites were looked at, but this was a very-exciting opportunity to be within the heart of the medical centre of Manchester.

“The building was very challenging, but it was in a key location and Nuffield took the approach that if we could make the architecture work, and fit it out to suit the building, then we would go ahead. It doesn’t usually go that way.

“The main thing for Nuffield was the location and, at the beginning, even though they wanted to build it there, we had to make sure it was financially viable and it wouldn’t be more sensible to start from scratch on another site.” 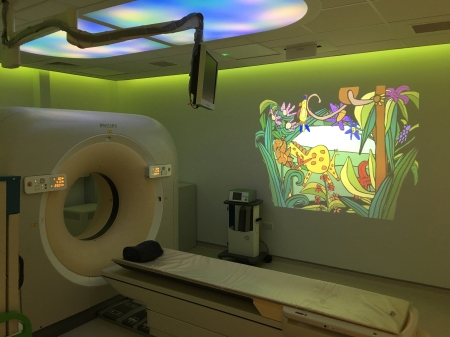 Catherine Mulley and Stuart Goodwin from Pozzoni Architects were in charge of making the building work.

Their brief was very clear – to create a diagnostics suite that would enhance the patient experience and would appear more like a boutique hotel than a clinical space.

Mulley said: “This was a very-difficult site and to begin with I thought it was a crazy idea. Why would we make our lives difficult when the project seemed so impractical?

“But, having visited the site several times since, I can see now that it makes perfect sense.

The building works, and for me it has been a really-exciting scheme to be involved with

“The building works, and for me it has been a really-exciting scheme to be involved with.”

The property houses some of the latest high-tech imaging and diagnostic equipment, including Philips’ MRI and CT scanners and ultrasound and digital radiology systems. There is a particular focus on orthopaedics and cardiology services.

To get this bulky imaging equipment through the windows and doors of a listed building and to house them on the first floor was a challenge very rarely attempted.

Goodwin said: “You would not normally put MRI equipment above ground level. Internally, we had to build out and use stainless steel beams to create a raised floor so there were effectively two levels in the end.

Playing by the rules

“The main thing with MRI is sound transfer, so we also had to improve acoustics within a listed building where there were restrictions on what we could touch.

“Because of the size of the scanner, getting it into the building was also a challenge.

The clinical areas have been designed to medical grade, but the colour scheme and layout do not feel in any way institutional or clinical

“We couldn’t get it through the existing openings, so we had to alter the external brickwork on the gable walls and one Sunday a crane had to bring it in through the window openings. It was a real squeeze and afterwards we had to replace the windows and brickwork.”

Internally, there were additional rules on what could be done. Carpets and doors had recently been refitted in keeping with the building’s heritage, so any new additions had to match, including sourcing a range of new walnut-finish doors.

The colour scheme is subtle and warm, with paintings adorning the walls in many areas.

“It really doesn’t feel like a clinical space,” said Mulley. “It is more like walking into a living room.

“The clinical areas have been designed to medical grade, but the colour scheme and layout do not feel in any way institutional or clinical.

“This extremely-exciting project has had a big effect on how patients feel about coming for treatment.”

In keeping with new RIBA guidelines, a post occupancy evaluation is now being carried out to see how the building is working in practise.

Quite often the people you consult with at the beginning of a project are not the people who end up using the building, so post occupancy evaluation is very important

Mulley explains: “Post occupancy evaluation was something we did intermittently in the past, but it is now formalised and we ask our clients a list of questions.

“Quite often the people you consult with at the beginning of a project are not the people who end up using the building, so this sort of evaluation is very important.

“The client can learn lessons about how they design and run buildings and it is very important for future briefing exercises.”