Despite the Government’s commitment to increasing NHS funding; the healthcare construction industry is unlikely to see a major upturn in activity, according to experts.

In the latest Economic Construction Market Review from construction industry data specialist, Barbour ABI, it is revealed that, in May this year, the value of medical and health contract awards was £150m based on a three-month rolling average. This is a 1.6% decrease on April and 28.3% lower than for May 2018.

While the commitment to further government funding for the health service remains on the table; it is unlikely that this will provide significant uplift in construction output in the short-term at least

The report states: “The medical and health sector remains the smallest in terms of construction contract awards, both in terms of value and awards numbers.

“While the commitment to further government funding for the health service remains on the table; it is unlikely that this will provide significant uplift in construction output in the short-term at least. 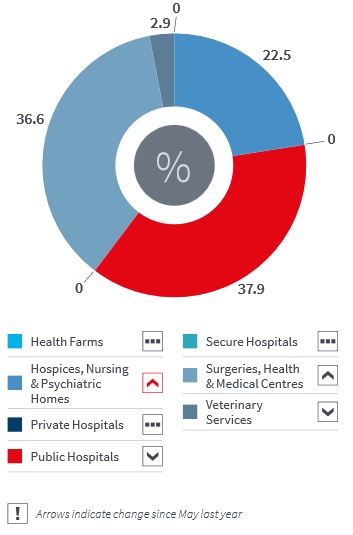 Public hospitals was the busiest sector in May

Only slightly behind was the surgeries, health and medical services sector, with a 36.6% share, which is 9.5% higher than in May 2018.

The only other sector with any significant share this month was hospices, nursing and psychiatric homes, with a 22.5% share, which compares to just a 12.9% share in May 2018.

The East of England was the region with the largest proportion of medical and health contract awards, with a 27.8% share, which compares to a 9.6% share in May 2018.

The largest contract award in this region was the estimated £9.2m redevelopment contract at Hinton Grange Nursing Home in Cambridge.

The project will see McGoff Construction redevelop an existing building to provide a 68-bedroom care home with dining room, offices, café, cinema and hairdresser along with associated parking and landscaping works.

The second-largest contract award in the region in May was the £5.4m contract for the provision of a new two-storey entrance block at Colchester General Hospital.

The contract was awarded to Seddon Construction with Brooks & Wood named as foundations and groundworks subcontractors and Catfoss Group named as frame subcontractor.

The medical and health sector remains the smallest in terms of construction contract awards, both in terms of value and awards numbers 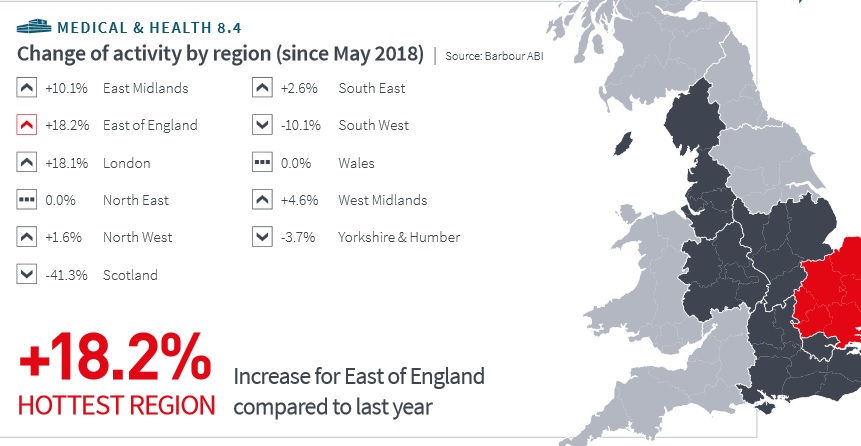 The East of England had the most contract awards, according to the latest Barbour ABI report

This downturn in activity is being seen in all sectors, with the Office of National Statistics (ONS) recently revealing that, while output increased by 0.6% in the month-on-month all-work series in May - driven by increases in both new work and repair and maintenance which grew by 0.4% and 1.2% respectively - output growth was flat at 0.0% in the three-month on three-month all-work series in May. This was because of a fall in repair and maintenance of 0.5% being offset by a 0.3% increase in new work.

In new work, the increase in the three-month on three-month series in May was driven by growth in private commercial new work and public housing, which saw growths of 2.2% and 8.4% respectively.

But it is not all bad news. Clive Docwra, managing director of construction consulting and design agency, McBains, said: “The construction industry will give a cautious welcome to these ONS figures, as they show a moderate increase in output in May after two successive falls in March and April.

“We expected a much-bleaker picture given the continuing fog surrounding Brexit and pessimistic predictions of a sluggish economy.

“The anticipated growth of 2.2% in private commercial new work and 8.4% in public new housing is also better than forecast.

“We fear this could be a temporary bounce, however, as the longer-term outlook is one of uncertainty, with many projects on hold until the detail of the UKs EU withdrawal becomes clearer.”