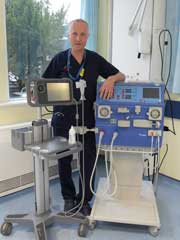 Rob Luke, matron for haemodialysis at Heavitree Hospital in Exeter, said: “Once a fistula has been surgically created, the patient needs to have two needles inserted for dialysis. Before ultrasound, we had to locate the blood vessels manually relying on sensation, which can be difficult. About two years ago, we tried using an ultrasound probe to scan patient’s arms prior to cannulation and found this gave us a very good idea of the location of the blood vessels and their shape and depth before we inserted the needles.”

“The big advantage of the NanoMaxx is its simplicity and ease of use. It allows us to cannulate easily and effectively and get good flows early on. Where fistulas are difficult to access, we can also perform cannulation under ultrasound guidance, enabling us to insert the needles straight into the blood vessel. The NanoMaxx is particularly useful for diagnosing clotted or poorly-flowing fistulas and has dramatically reduced the number of problems and patients being referred back to the vascular access team. It has certainly made a big difference to the service.”