A new £1m helicopter landing pad at Aintree University Hospital in Liverpool received its first visitors as part of an inaugural test flight by the North West Air Ambulance.

Medics say the helipad will save vital minutes when transferring trauma patients from air ambulance into the hospital, which is part of the regional major trauma centre together with neuro specialists at the Walton Centre.

Until now air ambulances have had to land on the playing fields in Lower Lane, after which a road ambulance is sent to transfer patients to Aintree’s £35m Urgent Care and Trauma Centre. This can add up to half an hour to the journey. But, with the new helipad, it will take just a few minutes.

Simon Scott, clinical director for major trauma at Aintree, said: “The trauma centre treats patients who are seriously injured and, in those circumstances, every second counts.

“Being able to minimise the transfer time will make a huge difference to our patients and will help us save more lives.”

The regional trauma centre receives patients from across Cheshire and Merseyside who need urgent specialist care which isn’t necessarily available in their local hospital. 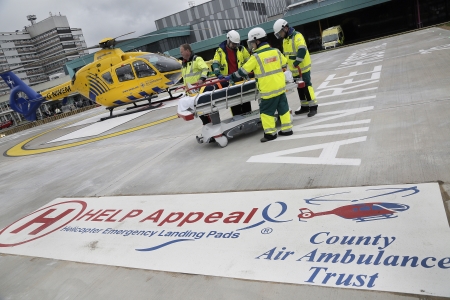 The helipad was funded by the HELP Appeal

“Helipads ensure our skilled crew can get patients to the best treatment centre quickly, which ultimately improves chances of survival and reduces the risk of long-term injury.

“This test flight is an important step in ensuring that the entire process is as safe and efficient as possible.

“It’s just the start of what will be an extremely beneficial addition to the emergency service network in the North West.”

The helipad was funded by the HELP Appeal, which has been providing significant grants to fund life-saving helipads since 2009.

Robert Bertram, chief executive of the HELP Appeal, added: “Everyone is aware of the vital roles that hospitals and air ambulances play in treating a critically-ill patient, but having a helipad beside the emergency department can play a significant part in saving vital minutes when transporting a patient to the expert care they need to save their lives.

“This is why we felt compelled to get involved and cover the £1m cost of Aintree University Hospital’s helipad. We knew the difference having it onsite would make.”