This 33,000sq ft scheme is seen as a flagship and exemplar for future schemes in Wales and is the largest primary care scheme in Swansea. The facility was opened by Edwina Hart, MBE AM Minister for Economy, Transport and Science, who was Health Minister at the time the scheme achieved funding approval.

Professor Andrew Davies, chairman of ABMU Health Board, said: "I am delighted that Edwina Hart opened the Beacon Centre. Edwina was a great supporter of this development when previously Health Minister and I am sure she was impressed with the result of the Welsh Government's investment. This is another symbol of the regeneration of the old docks area of Swansea through the SA1 development and another excellent example of ABMU's commitment to primary care."

The building houses the Harbourside Health Centre, SA1 Medical Centre, Eastside Dental, ABM University Health Board, Swansea University and the Coop Pharmacy. This is a unique mix of services in Wales and brings together training GPs and dentists with their teachers and also reduces the need for travel for thousands of patients by bringing treatment closer to the patients’ homes. The musculoskeletal service treats patients from all over Swansea and takes pressure off the main acute centres in Singleton and Morriston.

The scheme was awarded to Apollo following a competition and was designed by Shaun Prichard of B3 Architects in Cardiff. The design incorporated zinc panels set in a diamond pattern with black glazed brickwork and green render cut-out panels. The internal areas include a four-story atrium space with face concrete stair and lift shaft. 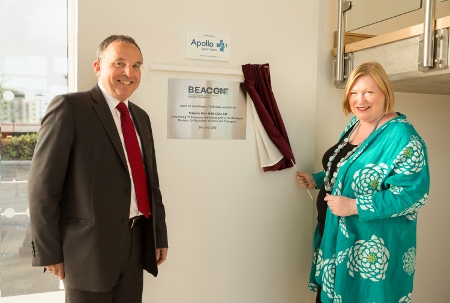 The official opening was attended by Edwina Hart, Minister for Economy, Transport and Science, who was Health Minister when the scheme was first given the green light

The interior design was designed by Ewan Dryburgh of DGA Architects and Studio LR and used colours and logos to brand each user and to provide an effective wayfinding solution without the need for a central reception. The combination of natural finishes and subtle use of colour and a real fig tree provides a welcoming and calming environment for visitors and staff alike. The facility also boasts three balcony spaces for staff and visitors along with a 40-space secure basement carpark.

Construction commenced in October 2011 by Swansea-based contractor, Dawnus, and reached completion at the end of April 2013. The scheme was awarded a BREEAM ‘Excellent’ rating and also achieved a very low EPC of 26.

Rob James, Apollo’s operations director and project lead, said: “This opening event is a suitable and fitting finale to what has been a brilliant scheme to work on. The whole team has worked extremely hard to achieve excellence in every aspect, from design, service planning, procurement, construction and through into operation and management. Being there from the initial concepts through to occupation is a real privilege and this scheme will be a legacy for all who have been lucky enough to have been involved. I am also delighted that Apollo has been retained as building managers as this gives me an excuse to visit the scheme regularly and maintain the excellent working and personal relationships built up over the years with the stakeholders”.

The Beacon Centre for Health is Apollo’s second scheme in Swansea following on from the Clydach Primary Care Centre, which was completed in 2009 and Apollo’s 6th scheme in Wales, with two being completed in Cardiff by the end of 2013. The landlord of this scheme is PHP Plc.