£28m women and children's hospital to be built in Telford

Plans have been submitted for the development of a new women and children’s unit at The Princess Royal Hospital in Telford.

The £28m scheme will house the consultant-led maternity, paediatrics and women’s units, including the children’s cancer ward.

Under the proposals, submitted in conjunction with developer, Balfour Beatty, and Aedas Architects, part of the centre will be new build and part will involve refurbishing existing accommodation at the hospital. There will be enhanced amenity spaces for patients, visitors and staff, including a range of external courtyards combining play spaces, private areas, landscape features and artwork. Interior design features will be incorporated into the children’s outpatients department to make the spaces more friendly and less institutionalised, and there will be bespoke paediatric facilities.

On the first floor will be the gynaecology department, obstetrics operating theatres, neonatal wards and delivery suites.

A design and access statement outlining the aims and objectives of the proposals, which has been drawn up for the planning committee, says of the plans: “The new scheme will provide a flagship women and children’s unit for the trust which will transform the patient experience and the delivery of these services.

"The facilities cluster around a central double-height circulation space, providing support facilities and access to the new departments. 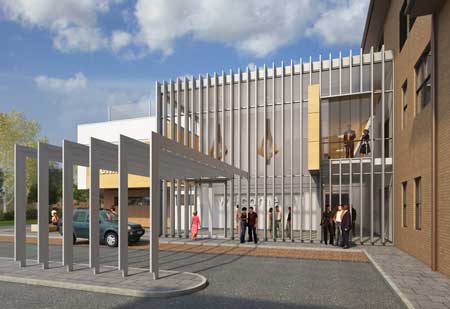 The plans have been submitted by Shrewsbury and Telford Hospital NHS Trust, Balfour Beatty and Aedas Architects

"The maternity facilities are contained within a new two-storey block of accommodation to the north of the ‘trium, while the single-storey paediatric accommodation combines a refurbishment of the existing nucleus template with a significant area of new build, formed around two new external courtyard areas.

"The upper level balcony overlooks a sedum roof level above the paediatric outpatients department, which is punctured by a series of feature rooflights, enhancing the spaces below.

"A new two-storey hospital street connects the new facility back with the rest of the hospital to ensure a fully-integrated hospital.”

The entrance to the new centre will be signified by a projecting bay on the southern face of the new build, highlighted in a feature material, with entrance signage. Visitors then enter into the heart of the new building via the full-height glazed facade. All departments are accessible from this area.

The proposed site is currently a car park at the north west corner of the hospital and the plans involve the creation of a new parking area near the unit.

If the plans approved by Telford & Wrekin Council, work is due to start later this year.

Chris Needham, associate director of estates and facilities management at The Shrewsbury and Telford Hospital NHS Trust, said: “We are delighted to have submitted our planning application for what we believe will be a fantastic 21st-century healthcare facility.”